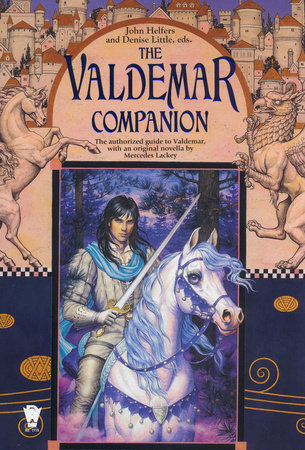 Fifteen years ago, Mercedes Lackey put pen to paper to write Arrows Of The Queen, her first novel about Valdemar, a fantasy kingdom replete with magical races and magical creatures, enemies and allies both sorcerous and mundane. This ancient land of mystery is unique even among fantasy realms, for it is protected by an elite corps -- the Heralds. These men and women gifted with extraordinary mind powers are Chosen by, and bonded with, wondrous horselike beings known as Companions. Brought by their Companions from the length and breadth of Valdemar to Haven, Valdemar's capital city, they are trained in a special school, the Collegium, and devote their lives to protecting king and kingdom. Mindspeakers, FarSeers, FarSpeakers, Firestarters, ForeSeers -- their individual talents are as varied as their backgrounds. There are even those who can channel the magical nodes in the earth itself to use for their own purposes. Garbed in their uniforms of white leather, they patrol their territory, dispensing justice and keeping the peace. They are emissaries, spies, diplomats, scouts, warriors, judges, and counselors.

With eighteen novels published, and millions of copies in print, Mercedes Lackey's Valdemar series has won the hearts of countless readers. In response to overwhelming demand on the part of her many fans, veteran editors John Helfers and Denise Little now present The Valdemar Companion. With the help and guidance of Mercedes Lackey, Helfers and Little have compiled a reader's guide to Mercedes Lackey's best-selling world of Valdemar. Included in this comprehensive work is an all-original Mercedes Lackey Valdemar novella, as well as an essay by Lackey about Valdemar, and extensive interviews with the author and her publisher. With an overview of the history of Valdemar, detailed essays on the various races and kingdoms, a substantial concordance containing entries on every major character, device and setting, and including articles on the magical races and creatures, a chapter on the diverse Valdemar fan clubs, and a section devoted to the songs of Valdemar, along with beautifully detailed maps, The Valdemar Companion is everything any Valdemar fan could wish for.