7 Facts You Should Know About Ethel Rosenberg

One of the most commonly misunderstood figures in US history is Ethel Rosenberg, who is often described as a traitor or spy in the same breath as her husband, Julius Rosenberg. Ethel’s Song: Ethel Rosenberg’s Life in Poems (A Novel in Verse), written by award-winning Jewish historian and poet Barbara Krasner, shows that there is much more to this complicated woman who was a victim of a corrupt justice system during the dark days of McCarthyism.

Based on rigorous historical research and primary interviews, Krasner’s novel shares Ethel’s heart-wrenching story in poems about her beliefs, loves, secrets, betrayals, and the injustices which ultimately led to her demise. The book follows her story from 1925 as a ten-year-old daughter of Jewish immigrants growing up on New York City’s Lower East Side to the electric chair in Sing Sing Prison in 1953, making her two beloved young sons orphans.

Most people know Julius and Ethel Rosenberg as Soviet spies. Weren’t they?

BARBARA KRASNER: Julius was a spy. He believed that he was helping the Soviets fight the Nazis. But he did not share atomic secrets.

Ethel was a product of poverty in lower Manhattan. She and thousands of others during the Great Depression believed that Communism would level the role that money would play so everyone could find a job and have enough to eat. But she was not a member of the Communist Party. She fell in love with Julius, and the two of them set out to find a place for themselves as a young couple. She was a dutiful wife and always supported Julius’s work.

The trial, in the spring of 1950, was a travesty. The verdict was predetermined before any of the proceedings began. While the Rosenbergs could have had more experienced counsel, I don’t think that the outcome would have been any different.

Ethel’s Song, and indeed the Rosenberg story, is one of social injustice. They were unjustly accused, tried, and convicted of a crime they did not commit.

Why is it important for teens to know the real Ethel?

Ethel’s Song is devoted to showing the many sides of this misunderstood American figure. Ethel was a woman of strong beliefs and she was dedicated to many causes. As an activist, she is relatable to young people today who want to stand up against social injustice. What happened to Ethel will also spark much debate on the fairness of the US court system, the death penalty, the role of women, government overreach, and more.

What will teens be surprised by?

Teens will be surprised, as I was, that Julius, Ethel’s husband, did not speak up about his wife’s innocence. Readers might also be surprised that Ethel stood by her husband no matter the consequences. The couple believed, until the end, perhaps naively, that justice would prevail and their innocence would be recognized. 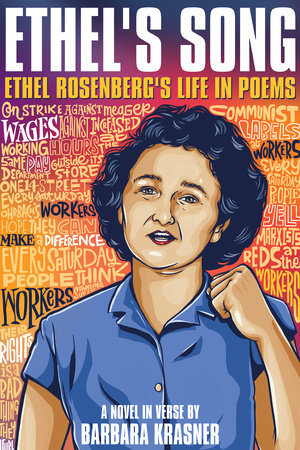 What was your research process?

I consulted FBI files and the trial records and also interviewed Ethel’s son, Robert Meeropol. I also consulted a variety of secondary sources written by Rosenberg advocates, journalists and scholars. However, Ethel’s Song is a novel, not non-fiction. I invented dialogue and other aspects.

How did you establish Ethel’s voice?

Ethel and Julius wrote many letters to each other while on death row at Sing Sing, the federal prison in Ossining, NY. These letters provided the inspiration for her voice and his. She was smart, articulate, and both she and Julius were well-read.

Has America changed since the 1950s? Would Ethel’s life be any different today?

Ethel’s Song shows how the times dictated her path. From giving up her dream of college to help support her family financially during the Great Depression to valuing the leveling of the playing field between the have and have-nots, and ways to fight against Nazism, antisemitism, and prejudice in general.

How does Ethel’s story continue to have relevance today?

We are in a time today when violent acts of antisemitism remind us of the world’s longest hatred. We are in a time today when voices of the marginalized yearn to be heard. We are in a time today when social injustice occurs and people are standing up against it. Ethel’s story is more relevant today perhaps than at any other time before it. Barbara Krasner (barbarakrasner.com) is the Director of the Mercer County Holocaust, Genocide & Human Rights Education Center and teaches in the English and History departments at several New Jersey colleges. She earned her PhD in Holocaust and Genocide Studies from Gratz College in 2022 and has an MFA in Writing for Children & Young Adults from the Vermont College of Fine Arts. A Sydney Taylor Honor award winner, she publishes the popular blog, The Whole Megillah. Her poetry has appeared in journals like Nimrod, the Paterson Literary Review, Cimarron Review, and others.