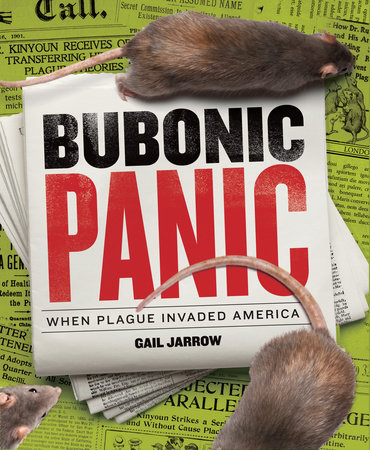 Uncovering the true story of America's first plague epidemic in 1900, this book is perfect to share with young readers looking for a historical perspective of the Covid-19/Coronavirus pandemic that is gripping the world today.

In March 1900, San Francisco's health department investigated a strange and horrible death in Chinatown. A man had died of bubonic plague, one of the world's deadliest diseases. But how could that be possible? Acclaimed author and scientific expert Gail Jarrow brings the history of a medical mystery to life in vivid and exciting detail for young readers. She spotlights the public health doctors who desperately fought to end it, the political leaders who tried to keep it hidden, and the brave scientists who uncovered the plague's secrets. This title includes photographs and drawings, a glossary, a timeline, further resources, an author's note, and source notes.

★ "Jarrow's detailed narrative and attention to the stories of the medical figures involved make this compelling reading. As in the previous volumes, the level of research on display is impressive… The large number of photographs and illustrations enhances the text, and the layout is graphically interesting without becoming distracting…. A richly detailed exploration of a fascinating subject." —Kirkus Reviews, starred review

★ "With a mesmerizing description of the suffering endured by bubonic plague victims, followed by several fascinatingly gruesome photographs depicting visible signs of the disease, Jarrow hooks readers from the start. This final installment of the author’s “Deadly Disease” trilogy is as compelling as the first two titles… Weaving in numerous photographs and newspaper clippings, Jarrow tells an absorbing story. Nonfiction that reads like a thriller—not to be missed." — School Library Journal, starred review

★ "Jarrow concludes her Deadly Diseases trilogy with a harrowing, in-depth exploration of the reappearance of bubonic plague at the turn of the 20th century…. her gripping narrative balances the clock-racing work of scientists and officials attempting to understand and stop the plague with entwined themes of fear, prejudice, and anger…. Extensively researched, with numerous resources for readers looking to study the topic further." — Publishers Weekly, starred review

"Jarrow looks at plague throughout history and medical research into its causes, before zeroing in on its resurgence in the late nineteenth century, when it arose in Asia and reached Honolulu…. Thoroughly researched and clearly presented, the text offers a direct window into the period. The intertwined themes of prejudice against Asian Americans, public health officials hampered by politicians, and mistrust of scientific research… make the story complex, revealing a good deal about human nature as well as the period and the disease itself…. An informative book on an unusual topic." — Booklist

“The bubonic plague, or Black Death, seems conveniently trapped in history books, confined to Europe in the Middle Ages, where it famously killed a good portion of the population. In her third and final book in the Deadly Diseases trilogy (Red Madness, 2014; Fatal Fever, rev. 3/15), Jarrow covers that territory quickly before bringing us into the nineteenth century, where the plague continued to rear its ugly head in places like Hong Kong, Bombay (Mumbai), Honolulu, and finally San Francisco--where it first appeared in Chinatown in 1900…. Jarrow's treatment here is once again thorough and fascinating… an exemplary contribution to the genre of the history of science and medicine.” — The Horn Book