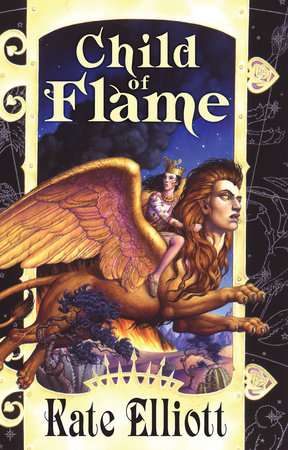 Part of Crown of Stars series

Set in an alternate Europe where bloody conflicts rage, the fourth book of the Crown of Stars epic fantasy series continues the world-shaking conflict for the survival of humanity

Far beyond the borders of Wendar and Varre, Alain, Liath, Sanglant, and King Henry must make their separate journeys, following twisting roads which will nevertheless lead them all to one fated moment in time….

Lost and alone in an unknown country, Alain is caught in a desperate struggle for survival even as he finds himself unwittingly drawn into the heart of an ancient conflict between humankind and the Cursed Ones….

Torn away from Sanglant and their child by creatures not born of earth, Liath faces her most difficult trial in a land of exile. Only there can she hope to discover her true parentage and the nature and extent of her unique powers….

Still staggered by the loss of his wife, the bastard prince Sanglant is nevertheless determined to seek out his father, King Henry, and bring warning of the conspiracy of sorcerers who’ve sworn to put an end to the Aoi, the Lost Ones—no matter how much destruction may be unleashed by their workings of magic….

But King Henry’s attention is not on his own troubled realm but rather on the throne of Aosta and the imperial crown, unclaimed for two generations. Even as a Quman army ravages the Wendish countryside, Henry marches south, ignoring the pleas of his beleaguered subjects….

And as the tides of war and magic wreak havoc across the lands, the great Cataclysm, long foretold in the stars, draws inexorably closer….

Praise for the Crown of Stars series:

“In the Jaran series, Elliott proved herself good at setting up conflict on a grand scale…. Here she creates a complex fantasy world with intriguing parallels to European history, colorful characters, and plenty of action and magic.” —Locus

“The saga’s world is extremely well built, its pacing is brisk enough to keep the pages fluttering…. This certainly could become one of the best multivolume fantasies—fans, take note!” —Booklist

“Elliott has a gift for creating grim, dark settings as well as swashbuckling action scenes (both magical and material) worthy of Rafael Sabatini. This is a splendid piece of intelligent entertainment.” —Publishers Weekly

“A solidly engrossing addition to a worthwhile series.” —Kirkus

“Kate Elliott, an excellent fantasist, writes lush and lyrical scenes and uses her characters to scale down cosmic events to a human scale.” —Midwest Book Review

“Ms. Elliott continues to weave an elegantly intricate tapestry of full-bodied characters who will fascinate and intrigue readers up to the very last page.”—Romantic Times Magazine (now RT Reviews)

“Strong plotting, thorough world building and sound characterization and character development make this novel a must-purchase for those collections that have invested in the rest of the series.”—VOYA

“Elliott has created a world with depth and color and peopled it with a large cast of characters, all poised on the brink of a cataclysmic conclusion.”—SF Chronicle

“This is a very good climax to a very long series…. The writing is clear and excellent, the universe is interesting, the politics and warfare believable.”—SFRevu

“Elliott has developed as real a fantasy realm as any writer working in the genre, and the very complexity of the story contributes to its verisimilitude.”—Chronicle