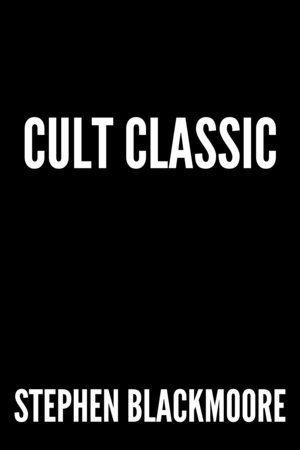 The ninth book of this dark urban fantasy series follows necromancer Eric Carter through a world of vengeful gods and goddesses, mysterious murders, and restless ghosts.

Eric Carter has a lot on his plate.

He's hunting the Oracle of Las Vegas, a literal talking head that manipulates the future to make its prophecies come true. But it has a new trick. It can change the past, too.

Throw in a hundred-year-old doomsday cult, time magic, and a terrifyingly powerful spell to raise the dead and it makes for a busy week. Carter knows the Oracle is behind it all but he can't figure out how. Or why.

But he better figure it out soon or he, the city, and everyone he knows might be wiped from existence.

Cult Classic is noir urban fantasy at its finest, with a cutting voice, sharp wit, and a plot that will keep you on the edge of your seat.

Praise for the Eric Carter series

"Demons and dark magic and gods of death: what's not to like? Blackmoore's hard-charging prose hits like a bullet fired from a cursed gun.... Fast becoming my favorite urban fantasy series, Broken Souls is a welcome addition to the necromancer chronicles of Eric Carter. Read this book. Read it now." —Chuck Wendig, New York Times bestselling author of Wanderers

"Eric Carter's adventures are bleak, witty, and as twisty as a fire-blasted madrone, told in prose as sharp as a razor. Blackmoore is the rising star of pitch-black paranormal noir. A must-read series." —Kat Richardson, author of the Greywalker novels

"Broken Souls is a deliciously gritty thrill ride. I can't get enough of Stephen Blackmoore's warped imagination and superb noir sensibilities. This is a must-read for any fan of awesome things." —Jaye Wells, author of the Sabina Kane series

"Carter’s wry voice is amusing as ever, but the grief he carries is palpable, adding depth and a sense of desperation to this action-packed adventure. Readers will be eager for more after this thrilling, emotionally fraught installment." —Publishers Weekly (starred)

"Ghost Money is reminiscent of Kevin Hearne’s Iron Druid series, pitting a powerful human magic-user against the gods, while use of the Aztec gods calls all the way back to Mercedes Lackey’s Diana Tregarde books. Blackmoore’s fast pace and no-holds-barred prose give him a unique place in the genre." —Booklist

"Fans will find plenty to enjoy in the long-awaited third outing of necromancer Eric Carter. Blackmoore infuses his increasingly detailed and dangerous urban fantasy landscape with grim yet fascinating characters, and ensures that every step of Carter's epic journey is a perilously fascinating one." —RT Reviews (top pick)

"The entire series toes the line between gritty and dark but with heart. It ramps up the shock value and the tension without ever feeling like you've crossed the line into something uncomfortable and unreadable. Tight prose, memorable characters." —Fantasy Writers' World