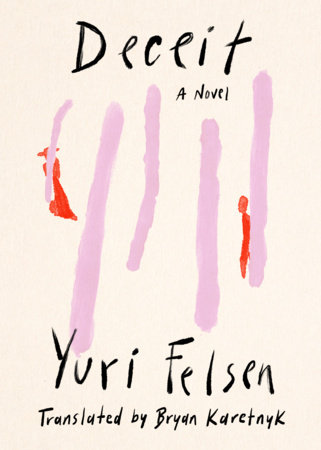 “This is . . . real literature, pure and honest.”
—Vladimir Nabokov

"The scintillating English-language debut from Felsen . . . [is] a fittingly volatile record of ruinous desire.
—Publishers Weekly

Once considered the 'Russian Proust', Yuri Felsen tells the story of an obsessive love affair set in interwar Europe in Deceit, an experimental novel in the form of a diary that is an as-yet-undiscovered landmark of Russian émigré literature.

We meet our unnamed narrator in Paris in the 20s, where he finds himself an expat after the Russian Revolution. At a friend’s request he meets the beautiful, clever socialite Lyolya, also a recent exile from Russia. What begins as casual friendship quickly turns into fascination and obsession, as Lyolya gives mixed signals and pursues other men. Our narrator, emerging from a depression, is soon overwhelmed by the very idea of her, which begins to contour all of his observations, thoughts, and feelings. While Lyolya continues to live a life unencumbered by the forces of social convention, and history, our narrator’s revelations, written in diary form, grow increasingly painful, familiar, and rich with psychological introspection.

Quite unlike any other writer in the Russian canon, Felsen evokes in poetic and idiosyncratic prose not only the Zeitgeist of interwar Europe and his émigré milieu, but also the existential crisis of the age.

"Yuri Felsen's Deceit offers the reader that rarest of gifts: a glimpse into consciousness as it was constructed nearly a hundred years ago; a portrait not only of how one Russian émigré lived in Paris in the first half of the Twentieth Century but of what and how he thought. This is an improbably modern novel in which, to my own surprise, I seemed, again and again, to encounter and recognize myself.
—Miranda Popkey, author of Topics of Conversation

"As astute as it is disturbed, as callow as it is wise, and as brilliant as it is idiosyncratic,
Deceit reads like the twisted love child of Proust and Dostoevsky, but with a genius all its own.”
—Antoine Wilson, author of Mouth to Mouth and Panorama City

“The miracle of Yuri Felsen is how his apparently Nabokovian rhythms lull you into a false sense of security, before a sudden and chilling exposure to the weather of a walk where the whole elegantly interwoven conceit of the narrator is ripped apart. And the pain of someone like Walser glints through a decadent surface of exiled life in Paris, to hint at darker shadows to come.”
—Iain Sinclair, filmmaker and author of The Last London

"Timely, relatable, and thoroughly absorbing, if Deceit proves anything, it is how little both our interior and exterior lives have changed over the span of a tumultuous century."
—Sarah Gear, Los Angeles Review of Books

"The prose is electrifying, irascible and melodic, a potentially unruly mixture brought harmoniously together by the translator Bryan Karetnyk."
—Matthew Janney, The Spectator

"We are trapped in the narrator’s head as we’re trapped in our own consciousness; this is Felsen’s power."
—The Irish Times

"So far, so very Proust, of whom Felsen was an acolyte. Witness his long, elastic sentences, and some of their favourite tricks, such as the centrifugal spin from a transient feeling to a pronouncement on humanity...Felsen's name deserves to be conjured with, just as it was before Paris fell."
—Telegraph

"This translation is a formidable achievement...reading these pages as the narrator minutely examines his own judgments has a hypnotic effect. Layer after layer is stripped from the narrator's mind until we are left with the core: amor vincit omnia."
—Literary Review

"For reasons that are evident from the first page, Felsen achieved with the publication of Deceit the reputation of a Russian Proust, an accolade reinforced by Karetnyk’s splendid, lucent translation."
—Hong Kong Review of Books