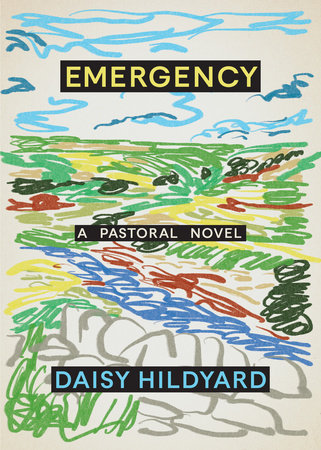 For readers of Rachel Cusk and Jenny Odell, a lyrical work of autofiction that explores the dissolution of boundaries between the self and our earth as we head towards ecological catastrophe.

“Emergency is an incisive kaleidoscope of past and present, nature and industry, stillness and pace, collapsing all into a tapestry of consciousness.”
—Ayşegül Savaş, author of Walking on the Ceiling

Emergency is a novel about the interconnectedness of all life on Earth. Our narrator is at home during lockdown, where she ponders both past and present. She remembers her 1990s childhood in rural Yorkshire. She recalls a kestrel hunt, helping a farmer save a renegade bull, and days playing with her best friend, Clare. In her village, neighbors argue, keep secrets, care for one another, and try to hold down jobs. Fox cubs fight in the woods, plants compete for space, a quarry slowly falls apart, and we see a three-legged deer who likes cake. With painterly vision, Hildyard evokes the bygone, pre-internet world of her schooldays, whose irretrievability signals at something far greater than fleeting youth. With urgent intimacy, Emergency asks us to look at the essential; the people who help define us, animals, local and global ecologies, and to consider what the slow disappearance of Hildyard’s and our own native environment might mean for humanity at large.

A requiem for the English countryside, a story of remote violence, and a work of praise for a persistently lively world, Daisy Hildyard’s Emergency reinvents the pastoral novel for the climate change era.

"In refusing to privilege human drama over natural processes, Hildyard captures the ecosystem’s delicate interconnectedness and suggests a new way of writing about our toll on the environment."
—The New Yorker

"[Emergency is] a gorgeous novel of a youth spent on the cusp of societal upheaval."
—Publishers Weekly

"The beauty of Emergency is in its attempt to glimpse an expanded paradigm of meaning, which encompasses but isn’t limited to our own."
—Sam Sacks, The Wall Street Journal

"Emergency is a crucial intervention. It drives a stake into the heart of the pastoral genre . . . This is what nature writing should be: absurd, overwhelming, and chaotically alive with the din of the world."
—Lauren Collee, The Rumpus

"There is something energetic in Emergency, something mystical about the human and non-human really meeting . . . Emergency reminds us, through its young protagonist, that we often miss so much of the world, so much of reality."
—
Alan Rossi, Literary Hub

"In meditative and exquisitely constructed descriptions . . . the natural world comes to us, blazingly alive, and our place in it does too."
—Hannah Hutchings-Georgiou, The White Review

"A stunning book—a balm for our times—containing the incredible gift of the everyday."
—Kirkus, Starred Review

"A quiet, complicated hymn to nature . . . [Emergency] is a novel with an elastic strangeness, gliding seamlessly between the familiar and the surreal . . . In the wake of the biggest natural melodrama of recent times, Emergency is a thoughtful, poised reflection on how much change we humans, among the animals, can ever bring to bear."
—Natalie Whittle, Financial Times

“This quiet, well-written novel, which has a surprise ending, is worth a look.”
—Barbara Love, Library Journal

"A keenly observed book of naturalism, [Emergency] is about a place, an era and the tenuous epoch of childhood which are all as fragile and fleeting as they are eternal in symbol and memory. I loved this book. When I finished it, I started over at the beginning."
—Sarah Blackman, Heavy Feather Review

"Emergency is a quiet novel that explores with remarkable subtlety the deep and fraying interconnectedness of life on earth. Hildyard writes with the precision and associative leaps of a poet . . . It’s something new that will linger long after you’ve finished reading."
—Stephen Sparks, Bookseller at Point Reyes Books

“This book succeeds because of the chilly and beautifully sustained voice of its narrator, the precise embroidery of its sentences and paragraphs, its observations of the natural world and insistence that there is no distinction between humans and environments.”
—Sarah Moss, The Guardian

“Daisy Hildyard’s Emergency is a pastoral novel for the age of dissolving boundaries.The slowness and gentleness of the text, its pace and its language, make you consider its title.”
—Abi Andrews, The Irish Times

“Past and present, nature and humanity, life and death intermix, ebbing and flowing in a stream of prose that carries the reader on an exhilarating … and violent ride.”
—Philippa Nutall, The New Statesman

“Hildyard doesn’t offer the narratives of therapy, social criticism or self-development to be found in other English pastoralists …. Her style is more reminiscent of such contemporary poets as Kathleen Jamie and Alice Oswald, with their quiet and attentive watchfulness to a non-human reality they only half-understand. Her prose calls for, and frequently earns, the same respectful attentiveness from its readers.”
—Dr. Nikhil Krishnan, The Telegraph