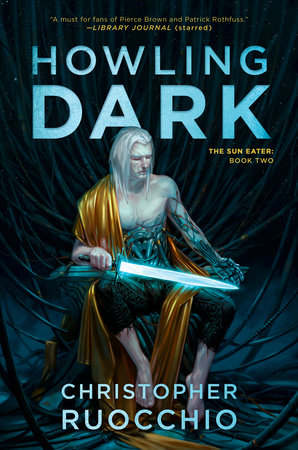 Now in paperback, the second novel of the galaxy-spanning Sun Eater series merges the best of space opera and epic fantasy, as Hadrian Marlowe continues down a path that can only end in fire.

For half a century, he has searched the farther suns for the lost planet of Vorgossos, hoping to discover a way to contact the elusive alien Cielcin. He has pursued false leads for years among the barbarian Normans as captain of a band of mercenaries, but Hadrian remains determined to make peace and bring an end to nearly four hundred years of war.

Desperate to find answers, Hadrian must venture beyond the security of the Sollan Empire and among the Extrasolarians who dwell between the stars. There, he will face not only the aliens he has come to offer peace, but contend with creatures that once were human, with traitors in his midst, and with a meeting that will bring him face to face with no less than the oldest enemy of mankind.

If he succeeds, he will usher in a peace unlike any in recorded history. If he fails, the galaxy will burn.

Praise for the Sun Eater series:

"Empire of Silence is epic science fiction at its most genuinely epic. Ruocchio has made something fascinating here, and I can't wait to see what he does next." —James S.A. Corey, New York Times-bestselling author of The Expanse novels

"Christopher Ruocchio's Empire of Silence is epic-scale space opera in the tradition of Iain M. Banks and Frank Herbert's Dune, without being a clone of either of them. His is a welcome new voice in science fiction." —Eric Flint, author of the bestselling 1632 series

"Empire of Silence has the sweep and political complexity of Dune (though no sandworms). It builds to a blazing climax, followed by a satisfying conclusion. I recommend the book." —David Drake, bestselling author of the RCN Series

"Empire of Silence is a rich tapestry of future history and worldbuilding, a galactic-sized story of a hero, a tyrant, but portrayed as a man." —Kevin J. Anderson, New York Times-bestselling author of The Dark Between the Stars

"Empire of Silence packs in action and erudition in equal measure. This is a gripping first installment in a space opera that delivers both high-adrenaline thrills and hard-earned wisdom about the human spirit." —D.J. Butler, author of Witchy Eye

"A richly imagined epic, briskly and vividly told." —R.M. Meluch, author of the Tour of the Merrimack series

"A craftsman of rare ability, Christopher Ruocchio lures you into a future filled with danger, action, irony, vaulting prose, and a few, precious dollops of hope." —David Brin, author of Earth and The Postman

"With the scope of Dune and a confessional, first-person voice that puts us into the mind of a possible madman, this is space opera at its most riveting and grandiose." —B&N Sci-Fi & Fantasy Review

"Space opera fans will savor the rich details of Ruocchio’s far-future debut, which sets the scene for a complicated series.... Readers who like a slow-building story with a strong character focus will find everything they’re looking for in this series opener." —Publishers Weekly

"Although stretched across a vast array of planets, the story line is often more focused on the intimate than on the expanse, giving it a wonderful emotional punch. This wow book is a must for fans of Pierce Brown and Patrick Rothfuss." —Library Journal (starred review)