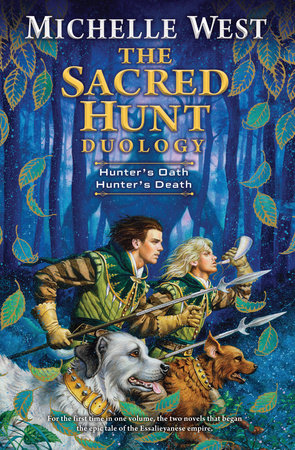 For the first time in one volume, The Sacred Hunt Duology contains Michelle West’s Hunter’s Oath and Hunter’s Death, the two novels that began the epic fantasy tale of Essalieyanese Empire.

“This duology is thick, complicated epic fantasy at its finest.” ―Felicia Day, author of You’re Never Weird on the Internet (Almost)

When the covenant was made with the Hunter God, all who dwelt in Breodanir swore to abide by it. The Hunter Lords—and the hunting dogs to which their minds were attuned—would seek out game in the God's woods to provide food for their people, and the Hunter God would ensure that the Hunters, the land, and the people prospered.
But in payment, once a year the Sacred Hunt must be called, the God's own Hunt in which the prey became one of the Lords, or his huntbrother—the companion chosen from the common folk to remind each Lord of his own ties to humanity. It was the Oath pledged in blood by Gilliam of Elseth and the orphan boy Stephen—and the fulfillment of that Oath would lead them to the kind of destiny from which legends were made....

Averalaan, that most ancient of cities, had long been the home of magics both dark and bright. For the site where this most civilized city of mortals new stood had once been a dread place indeed, a citadel of evil ruled by the Lord of Hell. Only through the greatest of sacrifices had he been cast back into his own dimension. But now, trouble was once again stirring in the hidden byways of Averalaan.
Blessed or cursed by their Hunter God and gifted with his most unique creation, the Hunter Lord Gilliam and his huntbrother Stephen were about to do the unthinkable. Guided by the seer Yvaine, they would journey beyond the borders of their kingdom, something no Hunter Lord had ever done. For only in Averalaan could they find their true destiny, even if it meant facing the Dark Lord himself....

Praise for the Sacred Hunt series:

“I love this author.... This duology is thick, complicated epic fantasy at its finest.... I will be reading the other books she has in this world.” ―Felicia Day, author of You’re Never Weird on the Internet (Almost)

“Intense and interesting fantasy…. [West] manages to overlay an ominous, brooding sense of fate over the characters that adds power to their struggles, and the culture of the Hunter Lords is unusual enough to make this new series worth checking out.” ―Locus

“This is a real page-turner. It will keep readers glued to the story until the final confrontation and leave them anxiously awaiting the next book in the series.” ―VOYA

“Those who like this kind of otherworldly saga....[wish] it would go on forever.” ―Kliatt